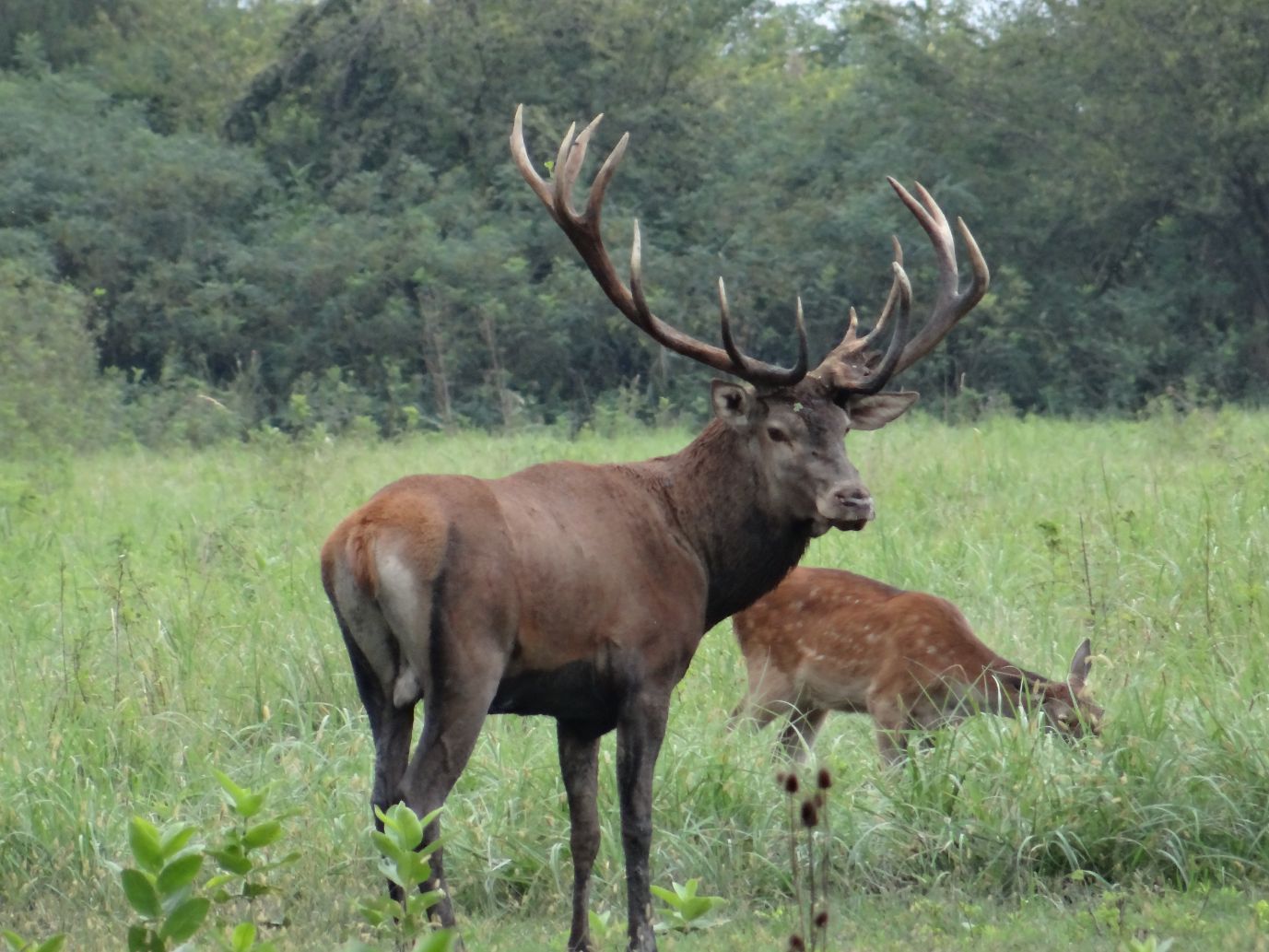 Red deer antlers are an example of fast-growing tissue and are the only mammal organ capable of complete regeneration. Each year set of an antlers are cast, and each year a set of a new one are grown. This is called antler growth cycle and is closely associated with reproductive cycle, hormonal processes, climate and hydrological factors. Climate and hydrological factors act directly through the air temperature, precipitation (rain, snow), snow, ice, insolation (photoperiod), frost and water levels.

Habitat or the living environment is defined as a set of natural resources and conditions presented in a given area to ensure the stability of the population that inhabits it. The aim of this paper is to present climate and hydrological impacts on the value of red deer antlers on the example of hunting ground along the Danube River.

The hereditary basis, the habitat conditions and the age class are the primary determinants of the RED DEER antler development. But that is not sufficient for the development of good antlers, because the heredity cannot be displayed if the environmental conditions are not good enough during the crucial time of the year. Depending on the environmental conditions, different phenotypic effects can be expected. The reason for significantly higher values of measured traits of antlers during one period in relation to another can be found either in the factors of a population (abundance, density, sex and age structure, birth rate, mortality, etc.) or in the habitat factors (climatic factors, size, depth, fragmentation, the distribution of food, water and shelter, etc.)

Temperature as a climatic element acts directly on antler development during the autumn – winter period (November, December, January and February) and spring period (March, April, May) (Graph 1). Temperature is the one that starts and stops the development of the vegetation so during the autumn – winter period temperature is essential in the sense of longer duration of vegetation while in spring the temperature is important for early initiation of vegetation. During the autumn – winter period males with this longer lasting vegetation maintain their body weight while the early start of vegetation in spring allows males to refresh their body early and to grow a new set of antlers with full genetic capacity. It is evident from Graph 1. that the purple line (2007/2008. hunting year) is continuously above average and it is particularly important to emphasize temperature values above average during December, January and February. During these months the average temperature is around 0 0C (mostly below) as it was case in most years during the study. Antler growth in that year had an early start and longer growth period which resulted in significantly higher values of observed traits. Growth and development of antlers lasts from 120 to 150 days and the duration of growth among other factors depends of the habitat conditions (climate) during that particular year.

Precipitation (rain), as an element of the climate on growth and development of red deer antlers acts in a way that with good temperature values (above average) precipitation initiate the growth of vegetation. Precipitation together with poor temperature conditions require more energy to maintain body processes but also precipitation is together with high water level of river Danube responsible for a burst of a wetland insect population. Precipitation together with water level and temperature during April may and June determines the number of insects whose biology is related to wetlands. Insects that may affect the growth and development of red deer antlers in Danube region are mosquitoes. The intensive activity of insects (in particular mosquitoes) interferes with the normal daily rhythm (feeding – resting and chewing – looking for food) instead the animals are nervous from bites and often forced into rush sprints and cold water as a safe refuge and all that during the day and June at the time when five and more years old red deer stags begin to develop royal rich with points. It is obvious that during years with greater mosquito numbers the royals are poorer with points

All physiological processes in both plants and animals depend on sunlight. Seasonal changes are induced by the length of the day compared to night. The sun light runs so called „biological clock“which have all animals including Cervidae family. The critical day length (photoperiod) sets the length of day which when is crossed either above or below acts as a trigger for a specific physical or physiological processes. At red deer everything is programmed and occurs exactly at a certain time of the year like mating, calving, migration, changes of hair, antler growth and development.

Graph 4. clearly shows a jump in the number of sunshine hours during April of 2007/08. hunting year (purple line) and it amounted 307,2 hours, which is one third greater than the ten year average for April (205,2 hours). Number of sunshine hours during May and June are about ten year average so this study showed that the most important month for growth and antler development was April when the matter is sunshine. Von Raesfeld and Reulecke (1991) stated that according to the author Rohring the red deer antlers grow about 12 % during march, 30 % in April, 31 % during may and the rest during June and July depending of the completion of the process. How fast or how many days will one growth phase last it depends on the light impulse (the number of sunshine hours) during the time of antler growth. Therefore Bubenik (1990) states that the new antlers can grow up to 2 centimeters per day and that the whole process lasts from 120 to 150 days.

Water is the crucial environmental factor for the development of forest ecosystems in floodplain forest. In these ecosystems water appears as precipitation, flood and underground water. Floods (maximum water levels) in these ecosystems and because of snow melting and heavy rainfall occurred mostly in late winter and early spring. The amount and duration of floods occurs as a crucial factor for the survival of such ecosystems in the spring while precipitation and underground water often play a crucial role for the survival of such ecosystems during summer. The Danube water level affects nutritional base of game but also it acts as a source of stress with high water levels in spring when it overlaps with the time of antler growth and development. The high water level reduces the size of habitat area that deer population can use and that is connected with food but also with a much needed peace and the possibility of increasing parasitic diseases.

Habitat key factor is the one factor whose influence is crucial for the population parameter that is a subject of evaluation. Equally important is the presence or absence of the key habitat factor in the crucial time during the development of this parameter. When one tries to link the growth and development of antlers with one key factor in this habitat, one is confronted with a mission impossible. The natural dynamics of habitat is a collection of environmental and anthropogenic factors that cannot be observed separately.

For the practice of wildlife management it is important to monitor the climate and other habitat elements so that with this knowledge one can predict the future antler value, population growth rate, body weight of calves at the start of a hunting year. All this is important because of possible interventions in the management plans in a way that the cull will be reduced in some age classes and it will be increased in some other age classes and all with the aim of long term sustainable management both in biological and economic sense. 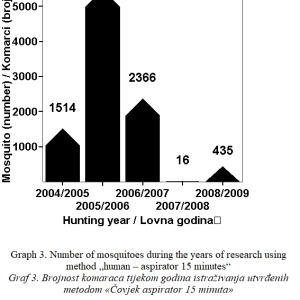 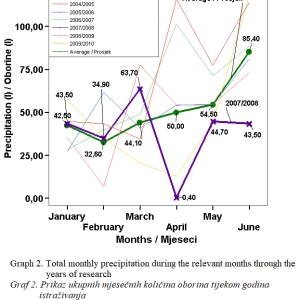 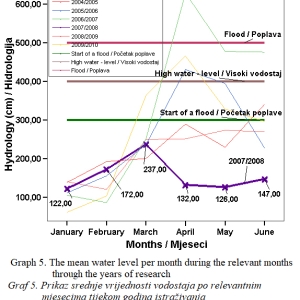 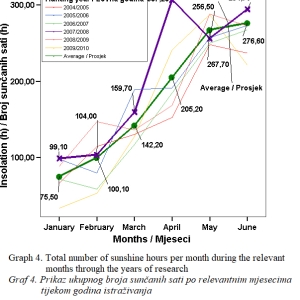 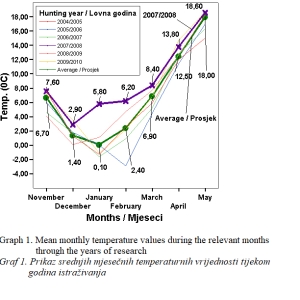